Finding My Own Way

One of the (many) surprises from the pilgrimage was discovering the diversity of practices that are espoused by other practitioners within various Buddhist traditions from all over the world. And in the process, finding, or rather confirming the shape of my own practice. Nowhere did this become more evident than at Bodhgaya Mohabodhi Temple, with its constant spectacle of monks and nuns going all out in the outer demonstration of their faith. My heart made it clear what it liked and did not like.

Liked, the tranquil beauty emanating from European nun's face, as she sat, eyes closed, in state of rapture, on ledge facing Bodhi tree.

Liked walking slowly, in rhythm with breath, around the tree.

Liked synchronicity of single bodhi leaf circling down to my feet, just as I was getting in touch with craving for such a leaf - cravings know no bounds, don't they?

Liked living presence of tree itself, descendent of original tree under which Buddha became enlightened.

Liked the palpable fervor of so many pilgrims, all united by common faith in the path.

Disliked the constant chanting that left no room for even a second of silence.

Disliked being caught in slew of monks circumambulating the tree at manic pace.

Disliked the sight of monks prostrating for hours at end, right outside the temple inner walls - what were they trying to achieve?

Disliked all the devotion to outer representation of imagined Buddha form.

Disliked the idea of Buddha relics - what did it say about impermanence?

I came home with my own relic, dried bodhi leaf that had met my steps at the temple, carefully preserved between two pages of pilgrimage diary. 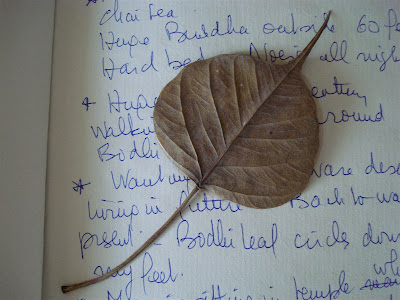 A modest symbol of the way I have chosen to travel the path. Naked, unencumbered by religious paraphernalia and props. With renewed faith in the Three Jewels of Buddha, Dharma, and Sangha.
To each, his or her own way.
Posted by Marguerite Manteau-Rao at 10:00 AM