Last night, I was invited to marry le Comte de Lis, a French Count. In a dream . . . I woke up thinking about the obvious symbolism of the fleur-de-lis as a sign of nobility. And I started to wonder,  what does it mean exactly, to become noble, particularly within the scope of the Buddha's teachings. 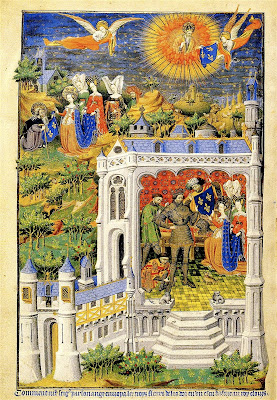 From  The Middle Length Discourses of the Buddha, Bikkhu Bodhi's translation, on the noble disciple:

Which I take to mean in plain English:

Having right view of life's impermanence,
and not clinging to that which cannot last,
and not resisting that which will not endure anyway.
Freeing one self from false notion of rigid I
who would like to think it is in control,
and adopting instead view of self as interdependent
with constantly changing internal and external phenomena,
and people, and things, and situations.
Letting go of hindrances of doubt, and worry,
and ill will, and craving, and laziness.
Being noble entails being wise,
and following the Four Noble Truths,
and the Noble Eightfold Path.

Makes perfect sense to me, given little I know of life so far. How could I refuse the inner marriage that was proposed to me?
Posted by Marguerite Manteau-Rao at 7:03 PM