The Nun Without a Robe 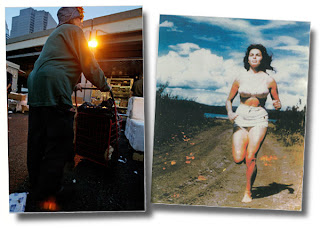 Ms. Wasserman often sent as much as $4,000 a month, usually through money orders, to her relations on both coasts. She also routinely sent along boxes of used clothing that she had culled from places like the Catholic Worker’s Mary House, on East Third Street, where she was known as that rare visitor who searched for items that fit others, and who had a gift for using humor and kindness to deflate the tensions arising from hardship.

“She became like a grandmother to dozens of women on the street who had nobody,” said Felton Davis, a full-time Catholic Worker volunteer. Sensing the lack of esteem in a woman beside her, he said, “She would say: `I have just the shirt that you need. I’ll get it for you.’ ”

Meanwhile, up in New Hampshire, the clothes kept coming. “The boxes would be opened, and it would be like: `Who wants this T-shirt?’ ‘Who wants this sweatshirt?’ ” Ms. Grinols recalled. “So many people in this area got gifts from her."

. . . With the money she earned by working in all weather, in the hours when the rest of us slept, Annie bought Chelsea a used Toyota Tercel. She paid for Chelsea’s tuition at the University of New Hampshire, and provided financial support to a ballet school in Los Angeles. Whatever money she took in, she sent out, while owning little more than a bed and a radio.

And I couldn't help but compare with experience I just had a few days ago during the Center for Compassion and Altruism Research and Education Conference with the Dalai Lama at Stanford University. What stayed with me from the conference was not the Dalai's gentle wisdom, nor the scientists' earnest efforts to research compassion, nor the overall sweet impression of a generally beautiful day. No, what shall remain, was the time spent at lunch sitting across from a Buddhist nun. A taint in the midst of so much shared goodwill. My friend and I had asked the nun simple questions about the monastic life, and about her teacher. The nun, obviously was not the least bit interested, and dismissed us with ice coldness, bordering on rudeness. Later, I saw the woman pushing her way through to get to the VIPs standing in the front of the big conference room. Smiling, signing her book, and bowing left and right . . .
A robe does not a nun make, just like a monastery is not to be found outside, but inside us instead.
Where is the nun, or the monk within you? How often do you let it guide your thoughts, and your speech, and your actions?
To Annie, the nun without a robe, I express my deepest gratitude for the gift of her inspiration.
Posted by Marguerite Manteau-Rao at 9:14 AM

Email ThisBlogThis!Share to TwitterShare to FacebookShare to Pinterest
Labels: compassion