The U-Bend on Happiness

Sitting on his front porch, gently rocking, the man waved and gave me a smile. The old man in a yellow sweater embodied what mind needed most in that moment. The gift of quiet contentment, nothing to be had. Since my walk last night, I have been carrying his image.
According to the following graph, my age puts me at the lowest point on the well-being scale . . . No wonder I have been feeling so much angst! 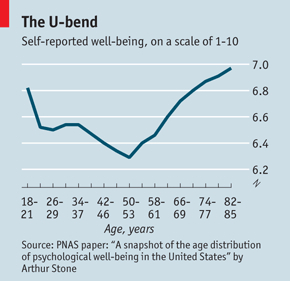 I am not sure I want to wait thirty more years to reach the old man's bliss . . . These older folks know something I don't and I want to learn from them:

Older people have fewer rows and come up with better solutions to conflict. They are better at controlling their emotions, better at accepting misfortune and less prone to anger. In one study, for instance, subjects were asked to listen to recordings of people supposedly saying disparaging things about them. Older and younger people were similarly saddened, but older people less angry and less inclined to pass judgment, taking the view, as one put it, that “you can’t please all the people all the time.”
There are various theories as to why this might be so. Laura Carstensen, professor of psychology at Stanford University, talks of “the uniquely human ability to recognise our own mortality and monitor our own time horizons”. Because the old know they are closer to death, she argues, they grow better at living for the present. They come to focus on things that matter now—such as feelings—and less on long-term goals. “When young people look at older people, they think how terrifying it must be to be nearing the end of your life. But older people know what matters most.” For instance, she says, “young people will go to cocktail parties because they might meet somebody who will be useful to them in the future, even though nobody I know actually likes going to cocktail parties.”
There are other possible explanations. Maybe the sight of contemporaries keeling over infuses survivors with a determination to make the most of their remaining years. Maybe people come to accept their strengths and weaknesses, give up hoping to become chief executive or have a picture shown in the Royal Academy, and learn to be satisfied as assistant branch manager, with their watercolour on display at the church fete. “Being an old maid”, says one of the characters in a story by Edna Ferber, an (unmarried) American novelist, was “like death by drowning—a really delightful sensation when you ceased struggling.” Perhaps acceptance of ageing itself is a source of relief. “How pleasant is the day”, observed William James, an American philosopher, “when we give up striving to be young—or slender.”
Accepting, enjoying the present . . .
Posted by Marguerite Manteau-Rao at 8:55 AM