Not Falling Into the Traps


In a moment, down went Alice after it [the rabbit], never once considering how in the world she was to get out again. The rabbit-hole went straight on like a tunnel for some way, and then dipped suddenly down, so suddenly, that Alice had not a moment to think about stopping herself, before she found herself falling down what seemed a deep well. Either the well was very deep, or she fell very slowly, for she had plenty of time as she went down to look about her, and to wonder what would happen next. First, she tried to look down and make out what she was coming to, but it was too dark to see anything [...] Down, down, down. Would the fall never come to and end? "I wonder how many miles I've fallen by this time?" said she aloud, "I must be getting somewhere near the centre of the earth [...] she looked up, but it was all dark overhead [...] There were doors all round the hall, but they were all locked, and when Alice had been all round it, and tried them all, she walked sadly down the middle, wondering how she was ever to get out again.

Every moment, the danger if one is not careful, of stepping into a trap, just like Alice. Actually, not just one, but many possible traps. We each have our own lot. 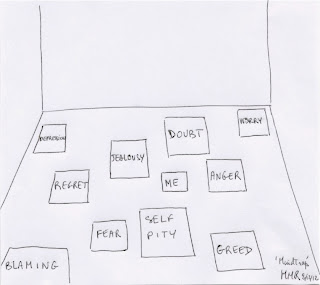 [...] suddenly she came upon a little three-legged table, all made of solid glass; there was nothing lying upon it, but a tiny golden key, and Alice's first ideas was that it might belong to one of the doors of the hall, but alas! either the locks were too large, or the key too small, but at any rate it would open none of them. However, on the second time round, she came to a low curtain, behind which was a door about eighteen inches high: she tried the little key in the keyhole, and it fitted! Alice opened the door, and looked down a small passage, not larger than a rat-hole, into the loveliest garden you ever say. How she longed to get out of that dark hall, and wander about among those beds of bright flowers and those cool fountains, but she could not even get her head through the doorway, "and even if my head would go through", thought poor Alice, "it would be very little use without my shoulders. Oh, how I wish I could shut up like a telescope! I think I could, if I only knew how to begin." [...]

Once down at the bottom, it is no easy feat to surface again in the bright light . . . It can take years, a whole lifetime, and even that may not be enough.
Every moment, an opportunity to pay attention, and to realize one is about to step into another dark pit. Saying a vigorous 'no, not going there'. And using the breath or the safety of a kind thought, to retreat and go around.
That's just the way the mind is!
Posted by Marguerite Manteau-Rao at 11:12 PM