The Strength to Bear

There are many kinds of prisons. Literal prisons with real walls, real bars and real guards. Golden prisons that deceive one into the illusion of false security and material ease. Inner prisons from limiting, self-created constructs in the mind. Different forms, and the same result in each case. A life not fully lived, and spent in great suffering. We all have our own version of the prison. This is why the Buddhist path emphasizes liberation so much. We are to free ourselves from the inner shackles that bind us.
I know for myself this process of liberation has been made possible by a steady practice of meditation. Not only has my practice helped me see more clearly the causes and conditions for the prison, thereby preparing an eventual release. It has also given me the strength to gracefully bear the hardships, both inner and outer, that have besieged me along the way.  I have found mindfulness practice to be the single most reliable source of courage and the ultimate refuge when suffering reaches a climax. With practice the hindrances loosen their grip, and so do outer stressors. Fear, anger, doubt, sorrow, discouragement still visit, but I do not let them have the last word, and they no longer dictate how I react to situations. There is also the joy and strength from standing on the boundless, bedrock foundation of  the Buddha, Dharma, and Sangha. Three gems that cannot be taken away by anyone or any circumstance.
From Aung San Suu Kyi, the Burmese politician and one of the most famous prisoner in the world, I have drawn much inspiration:

I decided to put my time under detention to good use by practicingmeditation. It was not an easy process. I did not have a teacher and my early attempts were more than a little frustrating. There were days when I found my failure to discipline my mind in accordance with prescribed meditation practices so infuriating I felt I was doing myself more harm than good. I think I would have given up but for the advice of a famous Buddhist teacher, that whether or not one wanted to practice meditation, one should do so for one's own good.

So, I gritted my teeth and kept at it, often rather glumly. 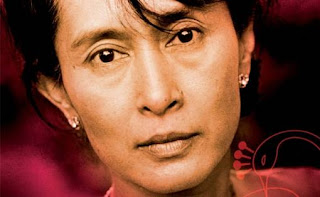 I may not grit my teeth, but my stomach does tighten, often . . . giving me one more object of contemplation.
What does your prison look like? How is your practice of mindfulness helpful? Where else might you turn for strength?
Posted by Marguerite Manteau-Rao at 5:00 AM

Email ThisBlogThis!Share to TwitterShare to FacebookShare to Pinterest
Labels: mindfulness