Back in my days as a green blogger, I used to worry a lot about climate change. I even thought I could make a difference with my writings. After three years of working for the cause, I finally gave up as I realized the futility of my efforts. Talking about global warming in my little blog was no match for the dark forces of big oil and dumb mass psychology. I moved on . . .

Once in a while though, a new piece of evidence comes out that revives my concerns again: 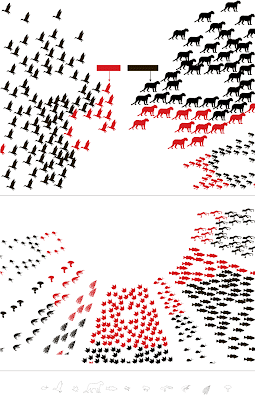 The picture is taken from Richard Pearson's recent New York Times article, Protecting Many Species to Protect Our Own:

Nearly 20,000 species of animals and plants around the globe are considered high risks for extinction in the wild. That’s according to the most authoritative compilation of living things at risk — the so-called Red List maintained by the International Union for Conservation of Nature.

This should keep us awake at night.

By generalizing from the few groups that we know fairly well — amphibians, birds and mammals — a study in the journal Nature last year concluded that if all species listed as threatened on the Red List were lost over the coming century, and that rate of extinction continued, we would be on track to lose three-quarters or more of all species within a few centuries.

We know from the fossil record that such rapid loss of so many species has previously occurred only five times in the past 540 million years. The last mass extinction, around 65 million years ago, wiped out the dinosaurs.

The Red List provides just a tiny insight into the true number of species in trouble. The vast majority of living things that share our planet remain undiscovered or have been so poorly studied that we have no idea whether their populations are healthy, or approaching their demise. Less than 4 percent of the roughly 1.7 million species known to exist have been evaluated.

It is often forgotten how dependent we are on other species. Ecosystems of multiple species that interact with one another and their physical environments are essential for human societies.

These systems provide food, fresh water and the raw materials for construction and fuel; they regulate climate and air quality; buffer against natural hazards like floods and storms; maintain soil fertility; and pollinate crops. The genetic diversity of the planet’s myriad different life-forms provides the raw ingredients for new medicines and new commercial crops and livestock, including those that are better suited to conditions under a changed climate.

We need markets that put a realistic value on nature, and we need effective environmental legislation that protects entire ecosystems.

Of course that last point assumes we the people are mindful enough of nature and of its importance for our survival . . . Once more, I wonder what to do? In particular, how can mindfulness be used to address one of the most inconvenient truths facing our human species? Can it?
Posted by Marguerite Manteau-Rao at 10:10 AM