With girlfriend, in the train, I got  approached by two fat women: 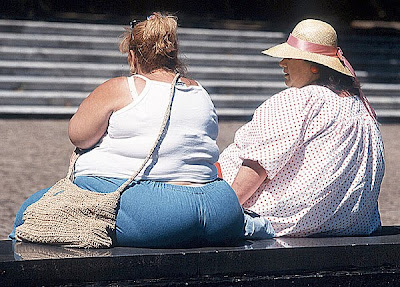 They wanted to sit with us. Discouraged by the lack of space, they decided to walk away. Soon after, a man came to offer some food. Mini quiches and things, neatly arranged in a square white box. Not being hungry, I suggested, maybe he could give them to the fat women instead?
Last night's dream left me wondering. What was up with the two fat women? Something inside was getting stirred up.
Sitting, I was met with great restlessness:
Resting place, impossible to find;
even counting breaths won't do,
neither do opening the eyes.
Body, not happy,
indulged with a few stretches,
still yearns for more action.
iPhone shows 15 minutes left,
and 10 emails waiting.
Torture, resumed.
Just staying in meditation seat
is only remaining card
in mindfulness game
A look at timer, once more:
one minute and forty six seconds left.
Back to being with restlessness.
Who is in charge?
I turned to Bikkhu Bodhi for some help:

. . . a young god named Subrahma appears before the Awakened One and explains the problem weighing on his heart:

"Always anxious is this mind,

The mind is always agitated,

About problems present and future;

Please tell me the release from fear."

. . .  When Subrahma came to the Buddha with his urgent plea for help, he was not seeking a prescription of Prozacs that would tide him through his next round of business deals and his dalliance with celestial nymphs. He wanted nothing less than total release from fear, and thus the Buddha did not have to pull any punches with his answer. In four piquant lines he told Subrahma the only effective way to heal his inner wound, to heal it with no danger of relapse:

"Not apart from awakening and austerity,

Not apart from sense restraint,

Not apart from relinquishing all,

Do I see any safety for living beings."

. . . This relinquishment of clinging cannot come about through the forcible rejection of what we love and cherish. It arises from wisdom, from insight, from awakening, from breaking through the deep dark sleep of ignorance. The sovereign remedy is to see that right now, at this very moment, there is nothing we can truly claim as ours, for in reality "All this is empty of self and of what belongs to self." Form, feeling, perception, volition, and consciousness: all are to he given up by seeing them as they really are, as "not mine, not I, not my self." To see the truth that all conditioned things are impermanent, disintegrating, and bound to perish, is to turn away from clinging, to relinquish all. And to relinquish all is to find ourselves, not barren and empty-handed, but rich with the wealth of the noble ones. For one without clinging, there is no fear, no tremor or agitation, no dark winds of anxiety. The one without clinging is akutobhaya, one who faces no danger from any quarter. Though dwelling in the midst of aging, sickness, and death, he has reached what lies beyond aging, sickness, and death. Though the leaves fall and world systems shimmer, he sees security everywhere.

So many clingings, most of them unconscious still, waiting to be released with the light of mindfulness. I understand now my dream about the two fat women. Rather than pushing them away, I need to invite them for tea instead. To find out what drives their (my) insatiable hunger, and to understand their (my) suffering.
Posted by Marguerite Manteau-Rao at 1:00 AM