Under Her Black Cloak

Last night, I faced death, up close. Fear and dread, still very much present, I review the dream that visited me:
In a vast complex, she was waiting to be executed, along with all the other women in the building. Only fifteen more minutes before her time came. She was terrified but would not show it. Instead, she decided to adorn herself, and also to gather her personal belongings. Her plan was to go say goodbye to her husband and to leave her baggage with him. She came down the stairs, into the lobby where much activity was taking place. There, she ran into one of the executioners and his helper. The man wanted to know where she was going. Didn't she know she was supposed to be executed soon? The man appeared without any feeling at all. She reassured him, yes, she would be right back. At that very moment, though,  she experienced a change of mind. What was she thinking? No, she would not abide. She would fight for her life instead, and con her potential killers. She made her way towards the elevator to her husband's place. A large group of men, all seeming to have a good time, were gathered. She heard them discuss their imminent departure. Up on the higher floors, she found herself in a deserted maze of hallways, happy to find one man at last who knew where her husband was. She told her beloved about her plan to escape her deadly fate, and to elope, unseen. She would need to change her identity most likely, and would no longer be able to communicate with him. Maybe he and her could decide on a time and place  to meet, every year, in the chance that some day she might be completely free again? She left him, tearfully, and made her way out to safety, ending in the Arab quarter in Paris. There, a young  man agreed to help her and pretend to be her new husband. Under the protection of her black burka, she could lead her life again, safe from indiscreet eyes. 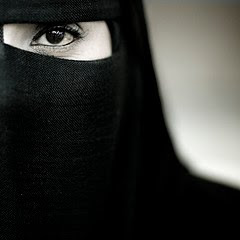 To bear witness, she documented her journey in a secret diary. And all along,  she relied on her practice of mindfulness to carry her through her ordeal. After a very long time, she finally heard the much awaited news, that a coup had toppled down the rulers that had tried to kill her. That evening, she saw her husband appear on TV, asking for her to reconnect with him on Facebook.
Primal fear related to forces at war inside. The feminine experience of Mara. About risk that loving heart   may get annihilated by cold, power hungry masculine principle. Resourcefulness of feminine, that can con negative complex. Waiting it out, until it gets destroyed through practice of mindfulness.  The way back to the heart requires no less than complete sacrifice of all attachments - material things, self-identity, relationships. Not holding on, letting go. With the loving support from patient lover.

To you, my Dharma sisters, I ask, do you know that story?
Posted by Marguerite Manteau-Rao at 1:00 AM