Under The Trees With Buddha

Sitting under neem tree at Bamboo Grove, next to Shantum Seth and other fellow pilgrims, I got my first real inkling of what it must have been like leading the Buddha's life. 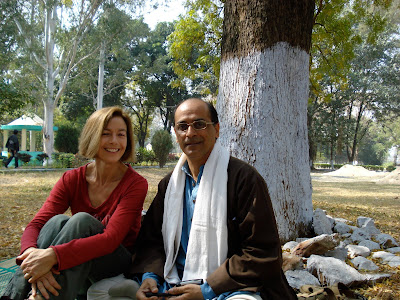 A life led amidst nature, walking through mustard fields, crossing streams, sitting under trees, climbing up peaks, sitting in caves, watching bright sunsets, fighting mosquitoes, receiving alms from the villagers, sleeping inside makeshift shelters. With stray dogs, and squirrels, and deers, and tigers, and elephants . . . Not much has changed, with the exception of disappearing tigers.
From 'In the Buddha's Words', edited by Bhikkhu Bodhi:

At Rahagaha, in the Bamboo Grove, the Squirrel Sanctuary, a certain brahmin approached the Blessed One and exchanged greetings with him. When they had concluded their greetings and cordial talk, he sat down to one side and asked him . . .

Thus I have heard . On one occasion the Blessed One was living at Aavatthi in Jeta's Grove, Anathapindika's Park. There he addressed the monks, thus . . .

The Blessed One took up a little bit of soil in his fingernail and addressed the monks thus . .

Then, monks wandering by stages, I eventually came to Baranasi, to the Deer Park at Isipatana, and I approached the monks of the group of five . . .

Thus I have heard. Once the Blessed One was staying at Rajagaha on Mount Vulture Peak . . .

At Kosambi in Ghosita's Park the Blessed One addressed the monks thus . . .

I wonder, how different the Buddha's life would have been, had he lived in our Western world, estranged from nature and the support from rural communities? Would he have become enlightened? How does one environment shape one's destiny? What are the physical conditions most propitious to one's awakening?
Posted by Marguerite Manteau-Rao at 9:16 AM

Email ThisBlogThis!Share to TwitterShare to FacebookShare to Pinterest
Labels: pilgrimage